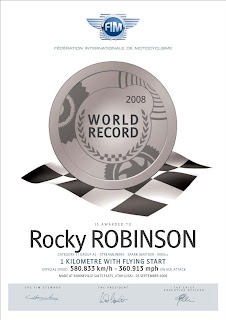 Having your record ratified is like eating your birthday cake and then receiving the frosting in the mail 5 months later. You know you've done the deal, but until it's OFFICIAL, it doesn't really count.

That all changed recently when the FIM Congress officially ratified our record. To make things sweeter, it will now be submitted to the Guinness Book of Records, and maybe if there's room between the world's ugliest bug and the girl with 2700 tattoos, our record will grace the pages of the most read book of achievements.

Normally this might not be that big a deal, but for us, in 2006 when we broke the then current record of 322 mph, a record which stood for 16 years, the company that makes the frosting skipped town and filed bankrupcy. We officially got our record, the FIM ratified it, but because the record was broken more than once that year, someone thought it wasn't important to add ours in the book since it was no longer the most recent record. Wah.

I know it's not that big a deal. But friends would ask me, you gonna be in the Guinness book? At the time we all thought we would. When the book came out and we weren't in it, well, we had to substitute crow for frosting and someone already drank all the milk.

The silver lining is the team fought back and once again we found our way back on top. At the end of the year (2008) we had no peers. I'm looking forward to putting the book on my office shelf (right next to my first copy of FLAT OUT, of course). Too bad it won't be out till the end of this year. By the time the record was ratified, the book had already gone to print. Just knowing that we did it and that others will be able to pick up the book (after stumbling through countless pages of the world's heaviest potato chip, or the world's largest pumpkin) they might even find us, a bunch of guys who chased a dream and finally won.

Dave Campos likened owning the world land speed record to this: You're standing on a block of ice with a noose around your neck and your hands tied behind your back. I realized after receiving Dave's baton what he was talking about. What Dave failed to mention in his analogy is that if you get close enough you'll notice that everyone who's been lucky enough to stand on the slippery cube, has cake on their breath...

I am very happy to locate your website. I just wanted to thank you for the time you spent on this great article. I definitely enjoyed reading it and I have you bookmarked to check out new stuff you post.

I really enjoyed reading your article. I found this as an informative and interesting post, so i think it is very useful and knowledgeable. I would like to thank you for the effort you have made in writing this article.