In land speed racing there are class records for various engine displacements; faired, unfaired; streamliners, etc. For me the only one that mattered was the ultimate, unlimited record. Fastest motorcycle...ever. I learned a lot talking to people at various trade shows after we clinched the title. (360.913 mph / Sept. 26, 2008) The Ack Attack draws a lot of attention, and rightfully so. It is currently the world's fastest motorcycle. But listening to the comments made by enthusiasts and fellow racers, it's more than that to some.

"I'm so glad a real motorcycle has the record again", was mentioned more times than I care to remember. The meaning behind this is simple. In their opinion the Bub machine (former record holder) doesn't have a motorcycle engine. There are several rules defining a "motorcycle" in land speed racing, or any other form of motorcycle racing for that matter. But defining a motorcycle in the eyes of the general public is this: it must have only two wheels and it must use a motorcycle engine.
The argument they (Team Bub) choose to make is that the "engine" was never used in anything else other than their motorcycle streamliner, therefore it is a motorcycle engine. The fact that they could build a one-off, 3000cc V4, turbo-charged unit designed and built specifically for land speed racing is a huge accomplishment. The motor works great. I know because I have more seat time running this motor than anyone else. People marvel at the technology. Is it a true motorcycle engine? You decide.
The fun th

ing about chasing the ultimate two-wheel record is innovation and the different approaches used by the different teams. The Ack Attack approach is horsepower, horsepower, horsepower. The machine is oversized, excessively heavy, and the least aerodynamic of the top three contendors. It is also probably the safest. With rider and fluids in place, the machine weighs over 2000 pounds. The steel roll cage is purposely over-engineered for safety. (and it has been tested and passed with flying colors) To compensate for the additonal weight and larger profile the Ack Attack produces nearly twice the horsepower of it's nearest rival.
Sam Wheeler's EZ Hook streamliner is probably one of the favorites for a num 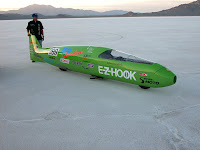 ber of reasons. For one, Sam is a very likable guy. In 2006 even though the Ack Attack and Bub teams both broke the current world record, it was Sam who left with the fastest single run of the day. Sam was the fastest man on two wheels on numerous occassions, though he has yet to put two successful runs together to achieve the holy grail of land speed racing, the ultimate two-wheel record. His machine is by far the lightest, most aerodynamic machine of the big three contendors. It also produces the least amount of horsepower, though by design it requires much less to get the job done.
There are new streamliners being built and the quest to be the "fastest" will continue. The next milestone for motorcycles is the 400 MPH mark. I can't say whether any one of us will be the first to reach it, but it will happen sometime in the not too distant future. The Ack Attack is officially "retired" at this point and I'm not sure if it will ever compete again. As Mike Akatiff likes to say, "never say never". So who knows. I know our competition is working feverishly for a few extra horsepower and a chance to steal the crown. There will always be someone faster.
There's no question about that.
Posted by Rocky Robinson at 7:29 AM No comments: