First Of Its Kind... 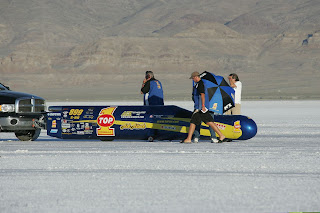 After surviving a 300mph get-off at last year's speed trials, I wondered if my racing career might be over. Luckily, after a team meeting, it was decided that not only would we rebuild and continue, but improvements would be made that would help us reach our ultimate goal of being the "World's Fastest". There are no guarantees, even though the current record stands at 350mph, and we have already run over 349, it takes more than being good...you have to have a little luck as well.

Conditions play a huge role in this sport. Wind, rain, salt conditions (we compete at the Bonneville Salt Flats in Utah) and of course the machine itself, all are important factors. You need good "mojo"; the stars have to be aligned properly, you have to wear your lucky underwear, and the Speed Gods have to be having a good day. It looks like this just may happen the last week of September 2008 as a new event is being planned to allow the fastest of the fastest to test their "mojo" in a league of their own... 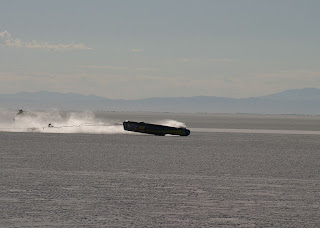 This picture was taken in September of 2007. I tumbled 12 times before coming to rest in a twisted, broken heap. Luckily, I was able to walk away uninjured, but the same can't be said of the machine as the Ack Attack was literally destroyed...
Time, a lot of hard work, and a little soul searching have us back in contention for 2008, and it appears with this new event just over the horizon, we'll get our chance soon enough. Here's the press release for this truly one of a kind speed trials as presented at motorcycle.com:
Fastest of the Fast...
World Land Speed Shootout aims to set new records
story by Motorcycle.Com Staff, Created Aug. 13, 2008

The world’s fastest two- and four-wheeled machines will gather this fall to decide which is the fastest of them all.
The TOP 1 Oil World Land Speed Shootout will take place Sept. 22-26 at the Bonneville Salt Flats in Bonneville, Utah. Ten teams, five on motorcycles and five automobiles, will compete in the event sanctioned by the International Motorcycling Federation (FIM) and the International Automobile Federation (FIA) to set official land speed records in their classes.
The competition is open to wheel-driven machines that have either set or come close to setting recent land speed records and conform to FIM/FIA technical and safety requirements.
The World Land Speed Shootout is organized by Mike Cook of Cook Motorsports. Cook will assemble a panel of judges who will select the ten entrants to the competition.
“We’re providing a platform for top contenders,” says Cook. “Land Speed Racing events like Speed Week have become very popular, which is great for our sport, but the number of entries makes it difficult to set new records, due to time constraints.
“This competition isn’t for amateurs – it is only open to the best qualified and most experienced teams in the world.”
The Bonneville Salt Flats is a popular location for high-speed record setting due to its extremely flat terrain. The 159 square mile area is the final remnant of an ancient lake in what is now northwestern Utah. The ground consists of up to six feet of densely-packed sediments with alkali salts. The surface remains flat and nearly perfectly aligned with the shape of the Earth by rain.
To be recognized as an official record by the FIM, a motorcycle must complete two different runs of the track within two hours, once in each direction, with the average of the two times considered for the record. 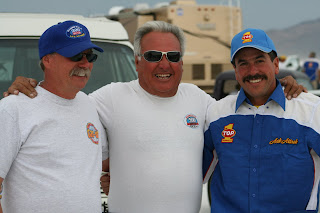 Dave no longer competes, but myself, Wheeler, Chris Carr and others will compete head to head for bragging rights and a chance to prove whose got their "mojo" on...